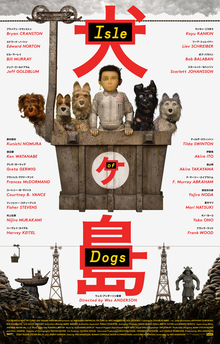 Wes Anderson: the quirky and unique director where you’re pretty much guaranteed to love him if you know him. I am in that category. I was blessed with discovering his talents around the release of 2014’s “The Grand Budapest Hotel” and he quickly elevated the ranks into becoming my favorite director. On top of that, “Moonrise Kingdom” is my favorite movie of all time (I’ve seen it countless times at this point) and “The Royal Tenenbaums” has two of my favorite scenes of film history (the introduction and the tennis scene, to be exact. If you know, you know).

Needless to say, I was counting down the days until the release of “Isle of Dogs.” I had my reservations, though, as (unpopular opinion alert!) his stop-motion adaptation of “Fantastic Mr. Fox” is my least favorite film of his and “Isle of Dogs” is his only venture into the stop-motion film style since.

Don’t get me wrong, Anderson not at his best is still better than a lot of directors on a good day. However, with the world of unique color gradients and symmetry and magic that Anderson transports you to, I expect a little more.

First, most of my praise has to do with the impeccable animation. Every shot, every frame, is perfect as usual. This is even more impressive with this film breaking the record for longest stop motion film of all time. I was amazed at all the detail such as the wind blowing and the Japanese drummers that show up at the beginning and ending credits scenes.

However, there are, undoubtedly, problems with this script. It is oversaturated with characters to a point where it makes unclear who the protagonist is. The main gang of Chief, Rex, King, Boss and Duke are abandoned part way through to focus on Tracy who is obsessed with Nutmeg with no clear reason why. Tracy is essential to the plot, but the focus then put on Nutmeg is very random and has no rewarding value. And honestly, even though I’m more than happy to get more Greta Gerwig (who plays Tracy), the main four dogs are undoubtedly more interesting.

All the dialogue is delivered in a very straightforward matter-of-a-fact way when addressing advances in the plot which gets rid of most special aspects that are usually there in the plot of Anderson films. Also, Anderson gets so caught up in using translators for the Japanese language that it ends up being very distracting. It was a cool touch, but, at some point, it just becomes self-indulgent.

Overall, “Isle of Dogs” is an entertaining adventure with, sadly, many flaws. I would’ve been glad to wait another year if there was some cleaning up with the dialogue and characters.

“Isle of Dogs” gets a light to decent six out of ten.