Taking to the sky, leaving the ground behind 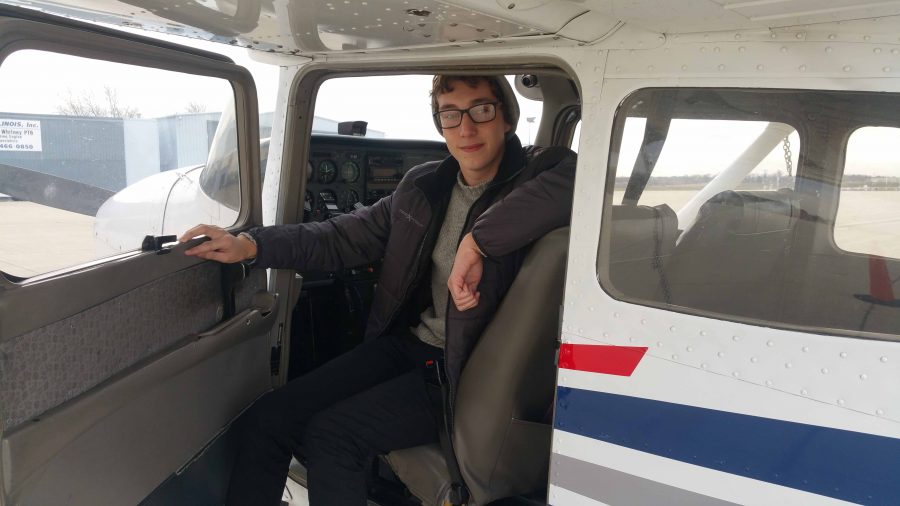 If you were to open the book that is Noah Berger’s life you would see the word “pilot” in bold letters. Since he was little, senior Noah Berger, has fallen in love with all things transportation. As he grew, that love blossomed, and it lead him to get his flying permit, opening a new chapter in Berger’s life.
Berger flies a Cessna 172R. It has only one engine and high wings, meaning they are above the pilot. According to Berger, it is small and fairly light making it easy to maneuver, and while it is not super fast, it allows him to do things like stalls and steep turns.
“Steep turns are really fun because your plane is basically horizontal with the ground. You’re just at an angle and you feel like if you weren’t strapped into your seatbelts and there was no doors, you would just fall right out.” Berger said.
Steep turns might be fun and dangerous according to Berger but he also thinks that stalls get the adrenalin flowing just as much as steep turns.
“Stalls are pretty interesting because you stop the plane in the air they are kind of freaky because once the plane stops it just tips forward and you’re going down fast,” Berger said.
Berger currently has his driver’s licence and while flying and driving may come with its differences, according to Berger, having your permit for both is very similar.
“First thing you have to know a lot more, the Federal Aviation Administration requires so many more regulations you have to know. In that sense it’s different but to get your student pilot’s certificate, I mean the first day you apply to flight school you can get it you just have to be with an instructor until they endorse you to fly by yourself and then it’s like having your permit for your car.”
While flying can be very exciting it does not come without risks.
“Well this one time it was a close call to an accident with another plane in the air, it was a Saturday afternoon, so the airport was really busy. One person didn’t listen to air traffic control and everyone got screwed up. There were six people trying to land at the airport, and we were all about to fly into each other. The air traffic control was yelling, pilots were talking over each other, and all the while I looked out my window and coming straight for us was another plane. My instructor saw it too, so he just flew us straight away from the airport,” Berger said.
Both of Berger’s parents are extremely proud and excited for him, according to Berger, even if his dad isn’t necessarily a huge fan of flying.
“My mom is really excited because her dad was a pilot and she remembers going up with him as a kid,” Berger said.
Berger’s dad however worries about the safety of his son when flying.
“My dad, he gets a little nervous about it but, he’s happy for me, he’s not a fan of flying so it’s kind of funny. He doesn’t mind flying it’s just the fact that I fly a smaller plane, he witnessed a helicopter crash before so he gets a little nervous about it but he knows you’re safe up in the air,” Berger said.
After graduating from Kaneland later in the year, Berger hopes to go to Louis University to major in flight and take all the steps in the way to becoming an airline pilot.
“I’m hoping to eventually become captain of an airline transporting people international. Flying would be really cool but we’ll see how far I get. Anywhere I can go that’s part of it, the travel seeing new places, being up in the sky,” Berger said.