Madeline Claeson: A Role Model For All 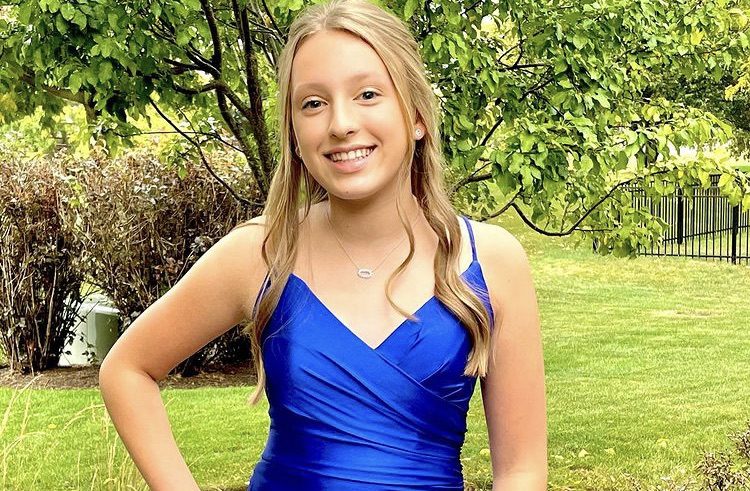 On the outside, sophomore Madeline Claeson may look like your average high schooler. Once you get to know her, though, you will learn she is an overachiever and always radiant with positivity. For many students, being involved with after-school activities such as sports or clubs is too much of a commitment. Juggling a part-time job, keeping up with grades and not to mention having a life outside of high school chaos, having the time commitment for extracurriculars is simply not feasible.

However, Claeson does it all. She is heavily involved in numerous extracurricular activities and continues to represent leadership, dedication and school spirit here at Kaneland. She is involved with multiple different extracurricular activities, such as cheerleading for the basketball teams as well as the football team and is also a runner for track. Not only that, but she has also taken on multiple important roles for Student Council and aspires to be president by her senior year.

From a young age, Claeson was timid and afraid to get involved with clubs and sports. However, by the time she got to high school, she made the cheerleading team and signed up to be a member of the Student Council. Getting involved with the school community, whether that is a sport, club or volunteer position, can lead to new friendships and discovering your strengths and hobbies. Claeson says she has made a lot of new friends from Student Council and sports that she has become close with.

It was the day of the first track meet of the season where Claeson met her friend, sophomore Linda Ray. Ray explains how nervous she was that day, and how Claeson befriended her.

“…I clearly remember Madeline being super supportive and encouraging about my abilities.” Ray explains, “She would constantly remind me that I could do it, and she stood by my side and helped me through it all. Looking back, it was so kind and warmed my heart that I was able to have such a good friend help me out, and I don’t know what I would’ve done without her.”

From a once shy young girl, Madeline blossomed into a strong leader as she began stepping outside of her comfort zone and joining clubs and new sports. Claeson is a prime example of how stepping outside of your comfort zone and getting involved with the school community can positively impact your social and emotional wellness. When she began taking charge of Student Council events and trying new things in high school, that shaped her into being more outgoing and confident.

“I think what I learned about myself was that I love being a leader and I love being involved with the school. So that’s definitely shaped me. I’m more outgoing I think, and I like challenging myself,” Claeson said.

She has helped organize multiple events for the Student Council, such as the Homecoming dance that happened in October. Currently, Claeson is organizing and promoting Relay for Life, an overnight walkathon in honor of cancer survivors. This event, beginning on April 29, will take place on the KHS track and the proceeds will go to the American Cancer Society.

Like many, if not all students, Claeson does experience stress from being so involved with clubs and sports. She has a lot of responsibilities and commitments with clubs and sports so it can be very overwhelming and stressful at times to prioritize her personal life. However, whether she is competing in a track meet, cheering in front of a crowd of people or organizing an event for student council, she always has a positive attitude and puts forth her best efforts.  Regardless of the stress that comes with being so involved with sports and clubs, she wouldn’t want to give any of that up.

Claeson says, “It definitely gets to be a lot, and sometimes it’s hard to prioritize and be like, ‘okay well I want to watch a movie with my family, but I also need to get this paper written for English.” Claeson says, “ So, definitely prioritizing everything is a bit of a struggle because I want to fit so much in, but at the same time, I don’t think I could take any of that out because I really love all of it so much.”

Her cheer competition earlier this year was Claeson’s first time competing for cheer. While she has cheered numerous times for football and basketball games, she has never competitively cheered in front of judges. During that early morning on the day of the competition, Claeson was very nervous. During the competition, Claeson felt the pressure of competing with other teams and cheerleaders who are more experienced than she is, and felt the eyes of strangers staring at her every move, waiting for her to forget the routine she has practiced dozens of times. However, she persevered through her anxieties and managed to focus on her performance. Even though Claeson is relatively new to cheerleading and this was her first competition, she gave it her all and she and her teammates ended up placing first.

Aside from being a hard worker, Claeson is one of the friendliest students at KHS. She has made a lot of friends from different sports and clubs she has been a part of and is kind to everyone she comes in contact with.

One of Claeson’s friends, sophomore Lexi White, says, “Madeline is very friendly and hardworking. My favorite memory with her is when we made blankets together with the rest of our track team.“

Like most high school students, Claeson has a vague idea of what she wants to pursue in the future.

“I don’t know what college I want to go to yet, but I want to be a doctor when I’m older. I love helping people, and I feel like being a doctor is definitely going to do that. I think it would be so life-changing to be able to save someone’s life,” Claeson said.

Madeline Claeson is one of the friendliest, most committed students at Kaneland High School.