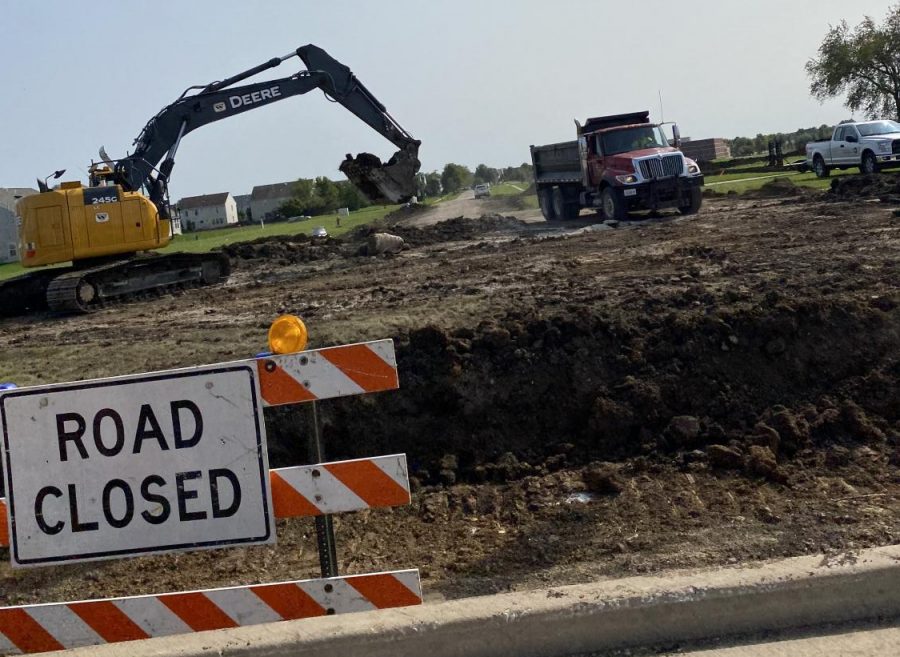 Construction on Anderson Rd. has been ongoing since the summer. This extension benefits emergency responders, as well as the residents in the area.

Anderson Road in Elburn will finally be extended through Blackberry Creek, connecting to Hughes Road. The extension will be funded by three different sources: federal money, state money and village money. The extension is supposed to be completed by Geneva Construction early November.

The extension of Anderson Road was in the original Prairie Valley neighborhood plan which was developed in the early 1970s. Elburn Village President Jeff Walter says the project will cost $1,222,034, and Elburn will pay $305,508 of that.

According to Walter, the benefits of this extension are a decrease in time it takes for the fire department and police to arrive at the elementary school in emergencies and additional convenience for residents that live on Anderson Road.

“The safety for the children there [is improved because] the fire department crew can get to the elementary school much quicker, and same for the police. There is a big convenience benefit to central Blackberry Creek residents… Blackberry Creek drive is a bigger cut-through than Anderson Road will ever be because of the way it’s located with the golf course and everything here, so I don’t think we’re going to get a lot of extra traffic,” Walter said. “It’s a convenience thing. It will allow the corner to develop; right now we’re talking about putting a police station right there by the water tower, which will then have access to the rest of the town through Anderson and Keslinger, with no worry about the train because of the bridge.”

Despite the benefits of the road extension, two residents of Blackberry Creek, Brittney Zimmerman and Cathy Nikdrandt, have reason for concern.

“I’m only concerned because there is no stop light, and there aren’t stop signs closer to the school,” Zimmerman said. “So that makes me a little concerned about Anderson Road opening.”

She has elementary school kids herself, and is worried for the safety of the students walking home.

Nikrandt, however, is not concerned about the flow of traffic. She believes that the four-way stop will allow for police officers to monitor the area efficiently.

Anderson Road is not the only road with construction going on. Elburn residents may have noticed a considerable amount of construction throughout the village this past summer. Zimmerman said she did not find the construction necessary, however it is not a bother to her and her family. Nikrandt appreciates it, but she found the construction on the bridge of Hughes Road to be unnecessary. Walter, though, sees the roadwork as justified.

“Anderson Road has always been planned, Route 47 is a state project and most of the other new construction is because of new subdivisions,” Walter said.

That other construction is happening at the same time as the Anderson Road extension is, according to Walter, merely a coincidence.