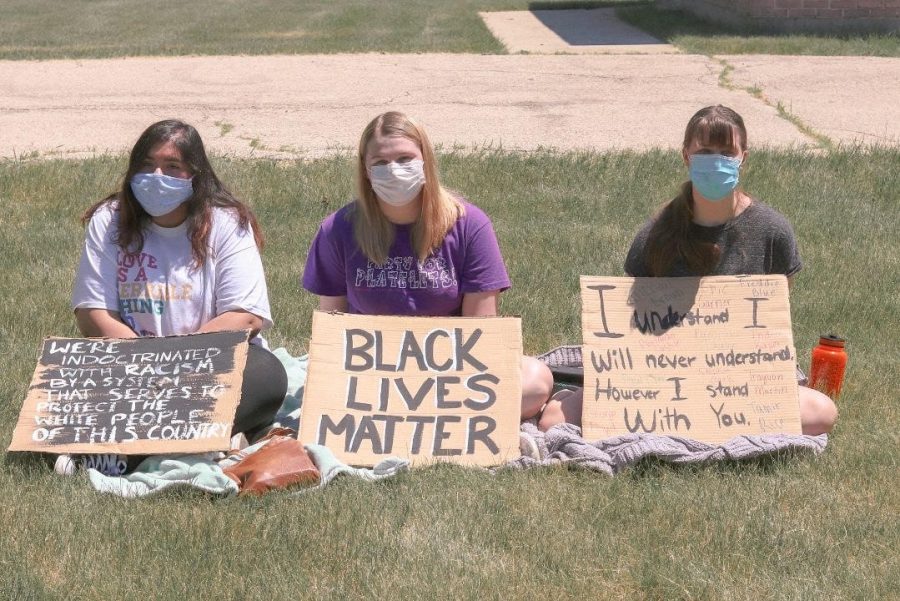 Community members at the peaceful assembly at Elburn's Village Hall hold signs in support of the Black Lives Matter movement. Throughout America, people have come together to demonstrate their commitment to ending systemic injustice towards and mistreatment of Black people.

2020 Kaneland High School graduates Bethany Duffey and Isabella Mohatt organized a peaceful assembly in support of the Black Lives Matter movement that took place from 12:00-2:00 PM on Sunday, June 7. The gathering was held at the Elburn Village Hall and featured multiple guest speakers from a range of backgrounds.

“The goal of the rally is honestly just to help our community become an ally for people of color and to help educate those in our community. So we are just holding a peaceful assembly that will be filled with speakers that are going to be educating us about systemic racism and white privilege,” Mohatt said prior to the event.

Guest speaker and 2020 Kaneland graduate Halle Gensler spoke to the audience about what they can do to help and be more than just an ally to the cause.

“Use your voice for change. Call your local politicians, donate to the movement, sign petitions and especially have those uncomfortable conversations with yourself and those around you. Confront coworkers, friends and family about racism. Speak up against the racist comments, actions and excuses they may have. Think to not change only on a large scale but within our smaller community,” Gensler said.

“Don’t be an ally. Be a co-conspirator. Be an accomplice to justice,” Ellis said.

While Elburn’s peaceful protest may be a step in the right direction, Duffey believes that there is more that needs to be done in the community.

“I think the most important things to do are listen to Black voices, whether that be friends or activists, and educate yourself by reading or listening to podcasts or even watching documentaries. I think that if you do these things, over time you will start to feel outraged and saddened and frustrated, which are emotions Black people have been dealing with their whole lives,” Duffey said.

Duffey and Mohatt were both in attendance for the Batavia protest on Wednesday, June 3, and they were inspired to gather support in their own town. The Batavia gathering was able to stay organized and peaceful, which was a main priority for Mohatt. She believed that having the support of the local police department would help promote peace and put a few nervous minds at ease.

“We wanted to have their support in regards to families attending because it kind of calms them and eases those nerves for people with young kids that will be attending the event,” Mohatt said.

Other protests in the area have also been very successful. Guest speaker and Kaneland graduate Autumn Ross attended other local protests and sees those events as an inspiration.

“I actually decided during the week that I was going to dedicate my entire weekend to going to protests. That’s what I’ve been doing. On Friday I went to Elgin, and they had a great turnout. Yesterday I went to Saint Charles, and they had an amazing turnout. Their assembly was powerful and moved me,” Ross said.

Before it was determined that the rally would be held at the Elburn Village Hall, it was planned to be at two other locations. One of those locations was changed because of some residents’ strong opposition to the assembly’s proximity to neighborhood homes.

“Our location has been a problem. We first wanted to have it at the Elburn Lions Club because we know that is where Elburn Days is held, and it can hold a lot of people and different events. But after emailing numerous people, they were unable to hold it because of the short period of time. So then we changed to Heritage Park in Blackberry Creek, and then there was a massive uproar from different families in the area not liking it there. Then we changed and settled on the location we are at now, which is the Elburn City Hall,” Mohatt said.

Uniformed police officers attended the rally but were unable to comment. When the rally ended at 2 P.M., everyone in attendance left without incident. Officers directed traffic downtown Elburn and monitored the Elburn Village Hall.

“We are all coming together right now, but let’s not stop today or tomorrow or this week. Let’s continue this movement, and by doing that we can continue to educate ourselves, vote in federal or state elections and just keep this movement so it doesn’t get buried like it has in the past,” Mohatt said.