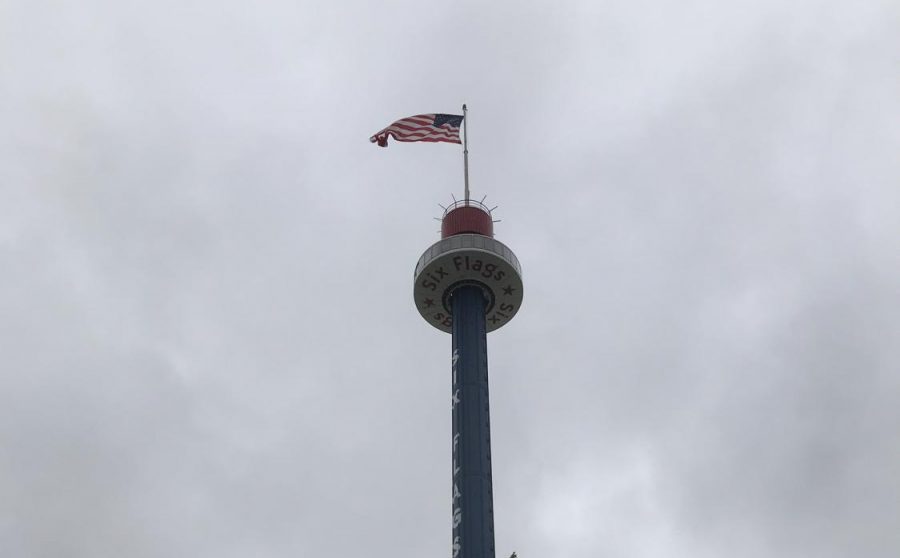 Six Flags Great America opened during 1976 and is a large tourist attraction. The amusement park averages over 24 million visitors per year.

Recently, I took another trip to Six Flags Great America. After taking multiple trips and riding each coaster, here is my ranking of the coasters and my general review of the park.

Great America is an amusement park under the Six Flags name located in Gurnee, IL and is home to 13 main attraction coasters alongside other small attractions like arcades, carnival rides, game booths, restaurants and gift shops.

Theming is a very important attribute to a park’s general appeal and aesthetic. It could have incredible rides and food, but since visitors spend most of their time in lines and walking around, if the environment is very lackluster and boring, it makes the park overall less enjoyable.

The Six Flags chain of parks is owned by Warner Bros. This gives them access to several characters that make the theming of the parks much more fun. In the lines, they play shows like the classic Batman cartoon, Batman Beyond and Looney Tunes. The whole park also has lots of greenery which adds to the general experience when walking around. Some areas of the park also have particularly different theming. The side of the park that features attractions like The Raging Bull and The Viper exhibits a western theme.

The food provided at parks is also very important. Great America is very generic in this element. They’ve got lots of restaurants and food carts, but it’s all very standard and overpriced as usual per theme parks.

Next, I want to talk about the lines in the park, but it’s important to establish some context here. The park’s hours vary day to day, but I visited on a Thursday and the hours were 10:30 a.m. to 9 p.m. From the Kane County area, the drive there varies between one hour and one hour and 45 minutes depending on time of day and traffic. If you want to go to Six Flags: Great America, leave early and arrive there before the park has opened. Around twelve everyday there will be an intense amount of people and lines will be extremely long, but in the morning right when the park opens you can get on several rides in the span of only an hour or two while barely waiting.

The other small attractions at the park are all quite fun and are a nice way to pause from all the big rides and lines and relax for a little while.

Now that I’ve talked about the park, its theming, food and small attractions, let’s get into the main part of the park, the coasters. There are 13 large scale coasters in the park, and I’ll rank each one and provide a score out of ten.

In the thirteenth spot is Demon. Demon is on the small scale in terms of the coasters on the list and is the only coaster that I would actually say I do not enjoy. It has a few small scale drops, a loop and a double corkscrew at the end of the ride. It generally doesn’t get that fast, but the one element that makes it unenjoyable is the amount of whiplash and shakiness on the ride. It is hands down the shakiest and most whiplash intensive ride at the park and because of this the fun parts of the coaster do not really matter. I give it a 2.5/10.

In twelfth place is The Dark Knight. Themed around The Dark Knight movie, The Dark Knight ride is one of the only indoor rides at the park. It’s also a viewing ride where there are different rooms set up with different things to look at, however it also has its fair share of fast moves or fun drops. The ride is fun but due to the restraints it has as an indoor ride, it just isn’t that thrilling. I give this ride a 4/10.

In eleventh place is The Joker. This ride is quite fun. It’s basically one big wavy loop where the carts are hanging off the track and free-spinning as the ride goes along this loop. Because of this freespinning element, it’s kind of up to chance on whether you’ll get a fun ride with several thrilling loops and drops, or a ride with several pressure intensive drops that make the ride painful. While the ride is very fun, it can get slightly repetitive. I give it a 5/10.

In tenth is the other Batman themed ride simply titled: Batman the Ride. I would put this ride above the previous two, but there are just a few things that make it not as enjoyable as others. For one, it is quite short, being only one minute and 25 seconds long. It also is inverted, which means the track is above you and your feet dangle free, which is very fun, especially on the loops as you’re on the outside. Similar to Demon, however, these fun elements are slightly overpowered by the amount of whiplash on the ride. During these loops it is very shaky, and you have to hold your head in place in order to stay comfortable. But it is doable and is still a fun ride. I give it a 7/10.

In ninth is The Whizzer. The Whizzer is a smaller scale ride at the park, and some may be surprised it is this high on the list. While it doesn’t have any crazy drops, it does get surprisingly fast at times, and it is also one of the only rides at the park to use the environmental features to its advantage. Some of the turns are angled and follow hills and trees. It is one of the more unique coasters at the park and is very fun. This one is a 7.5/10.

In eighth place is Superman: Ultimate Flight. This ride is also a very unique experience. The ride has you in a sitting position, but you are facing downwards with your chest and knees secured in place. The ride is quite short and has a few points that are more pressure intensive due to the unique position, but overall it is a very fun ride. While they’re different, I think it’s quite on par with the Whizzer so I’ll give it a 7.6/10.

The seventh-place slot is taken by American Eagle, the oldest ride in the park and one of three wooden coasters. A lot of riders say this ride is not very good, as they believe it to be too shaky and headache-inducing, but I don’t really think that is the case. This ride has many very thrilling drops, goes very fast and is generally a good experience. I personally enjoy the shakiness of wooden roller coasters so that is a plus for me, but there isn’t actually that much shakiness in the first place. I give American Eagle a 7.8/10.

X-Flight takes the sixth place spot. Similar to how the carts are on The Joker ride, this ride’s carts are hanging over the side of the track, but they do not free spin like The Joker. This ride is incredibly smooth and has many extremely thrilling drops, turns and inversions. It does an inversion through buildings and bars that seem like a tight fit but are very safe. There is nothing really bad to be said about this ride. It could be longer, but that is just because it is fun. I’ll give it an 8/10.

In fifth place is Viper. Viper is another of the three wooden coasters at this park. This coaster doesn’t really have a unique factor that makes it really fun or interesting. It’s just an incredibly standard coaster. It has a lot of thrilling drops and gets really fast at times. It’s also a very good length for a coaster. It deserves an 8.5/10.

MaxxForce is in fourth place. This coaster is one of the most unique coasters at the park. It’s a launch coaster that goes all the way up to 78 miles per hour in 1.8 seconds. The ride itself is only 17 seconds long, but it is incredibly exhilarating and smooth. This ride receives a 9/10.

In third place is Vertical Velocity. This ride basically takes the classic carnival ship ride and turns it into a coaster. It launches you up one side of the track, and then you fall back down and go up the other side backwards. This ride also launches you in the beginning, and the amount of air time and free fall you get throughout the ride combined with how fast you go at certain parts is what makes it so fun. This ride is a 9.5/10.

The runner-up in second place is Goliath, the world’s steepest wooden coaster. This coaster has the longest drop in the entire park, and that is what makes the ride so fun. The angle the carts are positioned on their way up the hill makes it so nerve wrecking, but getting over the hill and the speed of the drop is what makes it so fun. The rest of the ride is very fast and has lots of corkscrews and loops, but the drop is really the main selling point of the ride. It drops the passengers super fast and continues to go incredibly fast throughout the rest of the ride. This ride is a 9.7/10.

The ride that takes the number one spot is the Raging Bull. Of any of the roller coasters I have ever ridden in my life, this takes the number one slot. This ride’s drop is only second in verticality to Goliath, but it is incredibly smooth, is the steepest ride at the park, has several incredible drops and is over four minutes long. This ride is incredible and is a must. I would also say that even though it has some of the more extreme statistics, it actually is one of the best rides for beginners because of its smoothness. This ride is a 10/10.

And with that, there is the ranking of the coasters, but as I said at the beginning, the only coaster I don’t like is Demon.