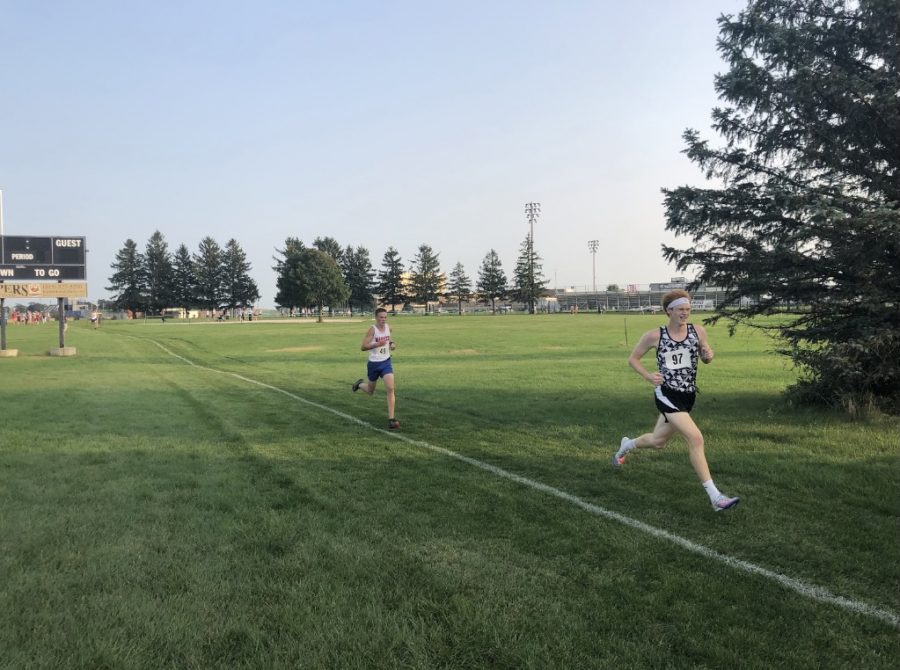 Senior Aaron Lodwig runs through the finish at the Kaneland vs. Marmion vs. Sandwich boys varsity cross country meet.

Although fall sports, including cross country, look different this year due to the rules and regulations set by the Illinois High School Association (IHSA) because of COVID-19, Kaneland’s coaches and athletic department have been able to host four cross country meets since mid-August. On Tuesday, fans and athletes alike were in masks. Spectators had to watch from designated fan zones along the course, and athletes were spaced six feet apart on the starting line.

Kaneland’s head coach Chad Clarey has been working on not only being able to run cross country meets according to the rules established by the IHSA, but also ensuring that athletes get practice time together during the pandemic.

“The biggest challenge is that every day you’re hearing about kids who can’t come to practice because their sibling is sick,” Clarey said. “As a coach, you have to be mentally prepared for anything. You can’t be surprised, you can’t be frustrated, you just have to embrace it as it comes.”

Unfortunately, the team did have a few instances this season where a family member of a teammate had symptoms associated with COVID-19, causing that athlete to stay home for two weeks.

“Other years, you kind of know you have a firm footing of what you can stand on, but every day something that’s completely out of your control as a coach is happening,” Clarey said. “So you take what you got for that day, you make the best that you can out of it and you hope that you can continue to do the right things to keep your team healthy and do those things that keep them healthy and safe as a group so we have another day.”

Marmion experienced similar challenges with being able to have their season. Head coach Paul McLeland was mostly concerned about the hybrid approach to school causing different schedules for athletes.

“Our school has an A group and a B group, and we have to stay separate, so basically except for meets when we’re together we train in two different groups, so we have some of our varsity guys training in A and some varsity guys training in B,” McLeland said. ”So I think that that’s a little bit difficult. I’m hoping at the end of the season, they let us come together again for the last like two or three weeks when not everyone is running.”

This ability to come together as a team is important in most sports, but McLeland especially sees the need in cross country.

“Cross country is about team culture and being together, and you can’t do that only at meets,” McLeland said.

At Tuesday’s meet, Kaneland senior Aaron Lodwig finished first at 16:42 on Kaneland’s 3.05 mile course. Junior Nolan Allen split a pack of three Marmion runners, finishing fourth at 16:51, with senior Parker Malone and junior Logan Cunz finishing sixth and seventh respectively at 17:07 and 17:09. Senior Charles Fitts finished ninth at 17:29, sealing the win for varsity with an average of a 47-second pack split between the five runners.

“Marmion brought a lot of competition today. We haven’t seen as much competition this year with COVID-19 and everything,” Lodwig said post race. “Logan [Cunz] dropped a lot of time, and so did Nolan Allen, really helping out the scoring of the run.”

Kaneland ‘s next meet is scheduled for Sep. 26 against Sycamore.