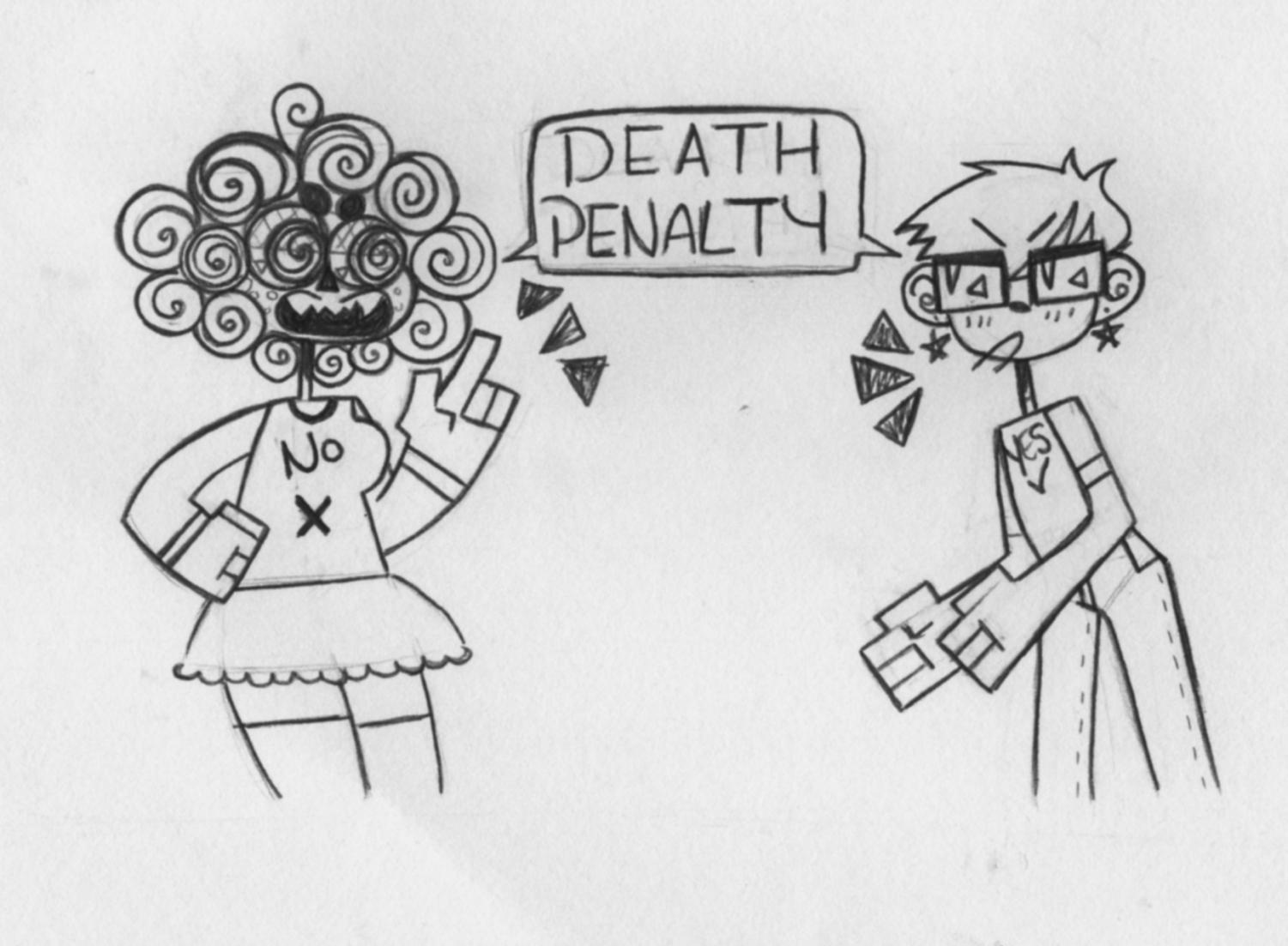 Fight to the death (penalty)

By: Matt Cushman and Richies Tiv

Once a month two of our staff members, Matt Cushman and Richies Tiv, are given a topic and they have 30 minutes to debate it. However, they are not allowed to speak. They type their arguments on a Google Document. They are allowed to use any research they can find on the internet to support their viewpoint.

Richies: Well, is it right for the killers to be killing innocent people in the first place? What we do to “the sentenced” is better than what the murderers do.

Matt: Most of the killers actually have some sort of mental illness. Therefore, it cannot always be controlled as it is an instinct that they have or a disorder that affects them.

Matt: But is murder actually going to help those families? What about the families of said murderers who may not have known of the mental illness they have?

Richies: Well what percentage of people who do commit murders, worthy of the death penalty, actually have mental illnesses. Just because I kill someone and say I have a mental illness does not justify my actions. In addition, if they have mental illnesses in the first place they should’ve been at a rehabilitation center and found some way to do no harm to society before they got a hold of a gun or some other weapon to kill.

Matt: Many people with mental illnesses can also come across that they don’t have one. Just because it is not visible does not mean that is not there. Also, mental illness is just one example of a person that should not be killed. A person could be in jail for a serial killing and just be let go in a split second with a lethal injection from the government. Does this actually show that the sentence has been served?

Richies: And anyways, if you propose to have a life sentence in prison, it would be way more costly than the death penalty. Would you like to pay your hard earned tax dollars to keep a murderer alive? Wouldn’t you want to keep that money for stimulating technological innovations or education? Besides, a number of people that have been diagnosed as mentally ill before they commit a crime is fairly low, it’s only 4.3 percent. And if anyone has the audacity to commit murder, they are all mentally ill. And that does not justify them to be kept alive.

Matt: The percent of taxes that goes to prisons, juvenile justice programs, and parole and other corrections programs is 5 percent. While this is a lot, when a person is diagnosed with mental illness, this could move them out of the prison to get the proper help they need. Also, if people who committed crimes like drug possession and other not so serious crimes were removed from prison, it would cut the tax payment a lot.

Richies: Also the lack of severe punishment like the death penalty is found to correlate with higher rates of crime. There needs to be a punishment for these criminals to invoke reality – killing innocent people is not okay. Your point is that removing people from prison would cut the tax payment a lot. And this is done by the death penalty.

Matt: If the death penalty is supposed to lower crime, then why are people still killing others? This fear of death is supposed to prevent crime clearly is not shown. Also, I said drug possession and other crimes, not murderers.

Richies: Well if laws are supposed to prevent crimes like rape, why do people keep raping other people? The same logic. Laws are meant to protect people and serve justice when needed. Not everything is going to work 100% the way you want it to.

Matt: It is also proven that having capital punishment did not have any affect on the crime rate as shown by The Advocate. This compared two states, one with capital punishment and one without, and came to the conclusion that there was no effect.

Richies: And Kenneth Land of Duke University Researchers found: “And in 2009, researchers found that adopting state laws allowing defendants in child murder cases to be eligible for the death penalty was associated with an almost 20 percent reduction in rates of these crimes.” Clearly, these two studies disagree: One shows that the death penalty works and the other shows it doesn’t. So let’s think about this ourselves, Wouldn’t you be even more scared if there was a chance for being killed for committing murder? And wouldn’t that make you think twice before you did it?

Matt: We must also what is happening in the killer’s mind. Many people do not just kill human beings for fun. But when they do, do you actually think they are worried about their own lives?

Richies: Yes they are, who isn’t worried about their own lives. Now those are the people with mental illnesses. They just commit the crimes in a state where there is no death penalty and clearly, that is why we need it.

Matt: There are crimes committed everywhere, death penalty or not, so I do not think that the state’s laws affect where a crime takes place. It is also shown that 7 out of the 10 most dangerous states in the US have the death penalty present.

Richies: What states? And what source?

Matt: Law Street Media shows the deadliest states in order and then I looked up a map of states with and without the death penalty.

Richies: The states have more crimes simply because there are more people and gangs. Besides the definition of “dangerous states” doesn’t necessarily include aspects that are just death penalty worthy.

Matt: Overall I believe that the death penalty should not be legal. It does not actually give murderers a penalty as they are instead killed off and not serving their full sentence. Also, it does not affect the crime rate and does not necessarily show a form of justice among family members of the victim.

Richies: The death penalty should be allowed because it is synonymous with lowering crime rates, it serves justice to the families affected, and it saves the tax money so it can be spent on better things like education, not keeping a psycho murderer alive. Think about those in poverty who have committed no crime, yet are on the streets every day. Those people could be helped instead of the so-called “mentally ill” killers.